The Presence of Our Absence

One of the most perceptive, non-kneejerk critiques of the technologies like Facebook that take and keep us online is made by Shane Hipps in a recent article in Relevant Magazine called "What's [Actually] On Your Mind?"  Quoting Marshall McLuhan, "we are what we behold," a pithy recognition of a nascent idolatry.  The technologies we use are "dramatically transforming our understanding of ourselves, our definition of community and our experience of God," he says.  The problem is that very few users are cognizant of the deep impact these technologies have on them.

First, he references the exhibitionism of Facebook, our fascination with the image we project.  We are not so much who we really are but who we want others to think we are; a subtle narcissism takes hold.  As Hipps says, "we become creators and consumers of our own brand," carefully arranging photos, quotes, favorite books, music, and so on in a way that projects not just what we love but what we want others to think we love.  Is this cynical?  I don't think so.  I feel the pull of it myself.  I'd like you to think I am an intelligent, culturally-saavy Christian, one who reads books above himself, listens to artful music, reads a passel of hip blogs, and all in all knows a little about everything.  It's me, you see. . . or is it?  Is it just what I truly like or what I want to like or want to be thought of as liking?  Sometimes it becomes difficult to distinguish between the image of the beholder and the beholder, particularly when you are constantly checking yourself out.

He also points out how that while Facebook connects us to more digital relationships, it actually erodes our ability to form meaningful relationships in real life, particularly for the still developing egos of adolescents, some of the largest users of social media.  The technology becomes an obstacle to healthy developmental progress in young people.

And with Twitter, a technology that encourages us to externalize our every thought, "we create a condition of absence in a world that desperately needs our presence."  We are so very there, tweeting ourselves into every moment, and yet we are profoundly absent in any real sense. Impulsivity and impulsive thinking are encouraged.  I often tweet links to articles I find interesting, and yet I suspect few people take the time to actually read them.  We are moving too fast, our attention spans truncated by the breathless pace of of the instant thought.

The solution?  Hipps suggests a technology fast, the point being to find a way to gain enough distance from the technology so that you can perceive its effect upon you.  (I should note that this works with television as well.)  Not staring at your online persona for a while may help you notice who you really are --- what your real likes and dislikes, personality quirks, and genuine gifts may be.

Can you do it?  Are you afraid you'll miss something?  I have done it, and I guarantee you will not miss a single thing of importance.  As I told my boss one time, if it's that important, call me.  You know my number.

Why I Am Not OutWalking 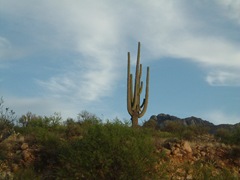 If you have wondered about my silence for the last two weeks, wonder no longer.  I was busy.  I took a vacation to my favorite place on Earth, Tucson, Arizona, and this time I decided to give the camera and computer a rest and just soak it in.  And it was great.  I saw rabbits playing hopscotch in back of my hotel room, Border Control agents with six bedraggled illegals handcuffed alongside a dirt road on the outskirts of Arivaca, 12 miles from the Mexican border, for the first time in all my hiking of canyons nearly walked right over a four-foot long rattlesnake, swam laps in a pool while the sun rose over the mountains (something I never, never do here), ate mesquite grilled steaks (best ever) at Lil' Abners, a dusty bar and restaurant which used to lie in the desert outside Tucson but now is surrounded by housing developments of Marana, ate sopapillas and honey (not just any sopapillas but those of Casa Molina which are like large, hot, fluffy pillows), made possibly my 50th trip to Pima Air Museum with my son, where you can get close to an SR-71 (Blackbird), possibly the coolest plane ever built, and I worshipped at a wonderful church, Catalina Foothills Presbyterian, where we sit on the front row (also not what I do at home).  There's more, but enough for now.  The stories have to wait.

I love the desert.  I can tolerate rattlesnakes and scorpions.  I love steaks and Mexican food.  I like living outdoors, taking my meals under the sky or stars.  All of that beats the heck out of blogging in front of a computer screen.  But stay tuned. . . . I'll be back. If you are a regular reader of this blog, I just wanted to let you know that I will be taking a short sabbatical for three weeks.  I began blogging one year ago with the goal of writing each day for one year.  Except for about 10 days when I was in Europe last Summer, I was able to do this.  My goal was to make myself write each day something of substance.  I've enjoyed it.  And I have appreciated many of you who have encouraged me by your comments, on and offline.

I've found it a helpful discipline.  At the same time, I realize that the immediacy of it makes it ill-suited for some writing that needs revision and development -- like a significant short story.  Sometimes, my off-the-cuff mini-essays would benefit from revision, further development, or even abandonment as well.  Reading a few of them now makes me grimace.  That's the risk of such writing, thoughts that probably belong in a private journal until they are better developed and more carefully considered.  Writers have the unfortunate tendency to believe whatever they've written is gold, particularly if they just wrote it.  Not so!  (Of course you know that.)

During this time I'd like to continue writing each day.  There is a short story I need to finish.  I also hope to evaluate the purpose of writing in this blog.  If you have comments for me, I'm glad to listen.  In some or fashion, I expect I'll be back on February 1st.  Please come back!

Out Walking/ Out Blogging 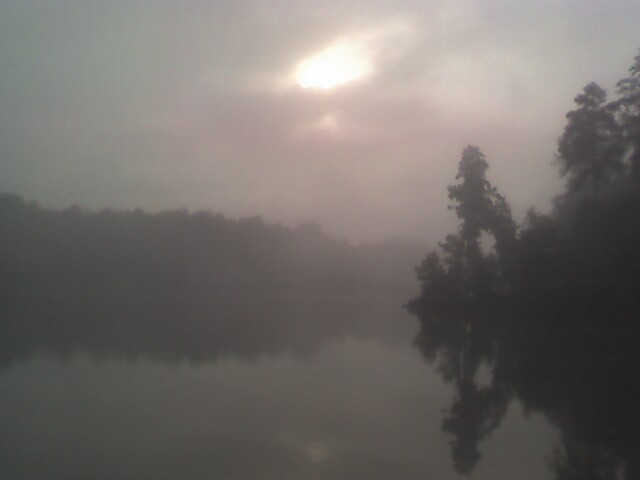 I'm always amazed at how technology is relentless in expanding choices. For example, I took this photo of a midst-shrouded lake near our home today using a digital camera which is a part of my phone/PDA/MP3 player/gameboy/audio recorder/word processing computer, and so on. (It's a Treo 650.) And now, I can even post to my weblog from the multi-purpose thingmajiggy (I don't know what to call it anymore.) Not that I necessarily want to, but the tech gurus figure that everyone will want the choice, right? Actually, it's not so bad, not with the fold-out infrared keyboard that is almost full size yet folds to the size a deck of cards. Is all this necessary? No. But it sure is fun.

You know, I could just blog all day wherever I am. Who needs personal contact or conversation? Don't call me. Just see me on my blog, right?

There must be something wrong here. With all these choices, I think we're losing something. And it doesn't take long to figure out what.

[By the way, the thinness of my post this evening is due to the fact that I have been researching via internet The Tapestry Project.  I'm weary!  Read about it here.]

First, I discovered that despite the fact that I am an introvert and not excited about talking to people, I can do it and have, over the years, learned something of the skill of having a good conversation.  And that's just what much of it is:  an art to be learned.  Some people come on it naturally and thrive on it, like my daughter.  For example, when she gets on an elevator with people she doesn't know, she engages them by watching them and complimenting them on an article of clothing, asking how they are, or anything else to start a conversation.  And she's very natural about it.  She's born to it; others of us learn it, slowly.

Second, having real conversation reminds me how focused on self I really am.  Whenever you are thinking about what you will say next and not listening (which happens to me a lot), you're not having conversation.  You are talking past each other.  It's not surprising that much political discourse today is just that -- talking past one another.  No one is really listening.

Finally, by having to listen, keeping eye contact and not being able to add much to a conversation other than questions, I realize how complex and enjoyable conversation can be.  It involves setting, expressions, little nuances or inflections of speech, and gestures, and rests on some history of contact with the person.  When all these factors are operative, it makes for a challenging and enjoyable time.

Realizing this -- the beauty of good conversation -- also makes me aware of the severe limitations of email, instant messaging, on line forums ("communities"), and even blogs.  Compared to conversation with real, live people, they are, as Stephen Miller reminds us, impoverished.  In the recent Mars Hill Audio Journal 81, Miller, who has written the book Conversation: The History of a Declining Art, notes that little real conversation is occurring today, not like the conversation of, say, the 18th Century parlors.  We all know the limitations and dangers of email -- useful for communicating bits of information, but not very useful as a discussion forum for communicating on serious matters.  Instant messaging can be even worse, as you can spend a great deal of time on line with several people and end up saying very little in the cryptic messages that go back and forth.  Even blogs are deficient.  While more can be communicated and in a more thoughtful manner, the "conversation" is mostly one way.  I find it helpful as a discipline and as a nice way to organize my thoughts, but not very helpful in having discussions.  In fact, it detracts.  I'll often be with someone and begin to say something in conversation, and then realize that they've already read it on my blog, thought about it, and don't have much to say about it at that time, having already processed it and moved on.  In that way, it's sometimes not a discussion starter but a discussion stopper.  At some point I may take this discipline offline, and yet part of the way I get up for it and keep a certain level of seriousness about it is the knowledge that someone -- some handful of people -- may be reading it.

Talking to people can be uncomfortable and challenging.  That's part of why we need to do it.  It's not what I get up for every day (I'd rather stay in bed and read a book), but I need it, and I need to grow in it.  It's part of imaging God, that is, the Triune God that exists in community, in continuous dialog -- the God who is there and is not silent, neither within the Godhead nor toward us.  He's speaking to us.  And he's not waiting on an email.  He wants us.

Ever have times when you just have too many things you're thinking about?  Today's the day for me.  This is a bit random, but perhaps there is some connection here: