It’s Coming to Take You Away 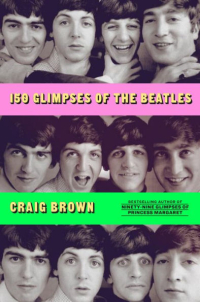 Craig Brown’s 2020 book, 150 Glimpses of the Beatles, is a fascinating farrago of Fab Four foolishness.  And I mean that alliteratively. Sourced from hundreds of books and online references, Brown is, if not exhaustive, always interesting. And while he can’t resist adding a dab of personal memoir, none of his personal reflections get in the way of his cataloguing of the antics, poor decisions, genius, and excesses of the four boys from Liverpool.

These are glances, to be sure, and more exhaustive biographies of the band and its members will have to fill in the blanks. Yet the value of the author’s two to six page dips into Beatles history is that you can turn to any of its entries and read them as standalone anecdotes. For Beatles fans who have forgotten more than they learned about the boys, it’s often an “aha” moment, as in, “Oh yes, I had forgotten that.” Yet I don’t recommend it for a newcomer to the story. Try Bob Spitz’s massive, The Beatles, for a more traditional and complete historical narrative.

I came to The Beatles a tad late. I remember viewing the 1970 documentary, Let It Be, though I must have seen it on a second pass--probably 1972--as my rock music awareness did not kick in until I was  about 14. By that time I was aware of the Beatles’ breakup, and there was an undercurrent of tension that I picked up on in the film, fueled by the ubiquitous and brooding presence of Yoko Ono.

John Lennon’s avant-garde artist wife doesn’t fare well in Brown’s book. (Does she in any account of the supergroup?) One example will suffice: In Chapter 135, he summarizes Yoko’s conversation with Victor Spinetti, the director of a stage adaptation of John’s book, In His Own Write. Yoko also wants Spinetti to direct a play for her. Asked for a copy of the script, Yoko tells Spinetti: you think Paul is really dead?” asked my friend Sam after 9th grade lunch. We’d both attempted to play “Revolution #9” off The White Album backwards, like every other Beatles fan, to see if we heard the ominous “Paul is dead.” It was inconclusive. And that photo from the Abbey Road album cover. . .could we look at it any longer, any harder? No, I suppose not. Brown recounts how every detail of the photo has been painstakingly scrutinized by Beatles fans.  Yes, been there, done that.

By the time I was old enough to care about the lads, the Beatles were over. Finished. So, beginning where I was, with Let It Be, I prodigiously bought up all their LPs. It’ll date me when I say that the first LP purchased in 1972 cost me a whopping $3.49 (around $21 in today’s dollars). Then I bought them again when they came out on CD. Then I bought them again in the remastered box set. (No, I did not buy the box set of the mono recordings. What do you think I am, a collector?) Then I began buying those multi-disc super deluxe sets for Sgt. Pepper, Abbey Road, and The White Album. Lest I forget. . .There’s the three-volume Anthology, recording and DVDs, and Let It Be Naked (the album minus the Phil Specter production). Some of these recordings I have bought at least four times, a total rivaled only by the number of times I have purchased Pet Sounds (an immodest number I withhold here for sake of my reputation.)

“By the end, their world had soured,” says Brown. “Intimacy and friendship curdled into irritation and recrimination.” And yet until the day John Lennon died, we all had hopes they would reunite.  I mean, surely they will work together again, right?  But it was not to be.

It was during a property class in my first year of law school that I learned John Lennon had been shot and killed. Someone told a girl sitting near the front of the room, and she shrieked and left the room, overcome with grief.

They didn’t know what to do with wealth or fame. They bought huge houses and filled them with objects, and yet they were lost, bewildered by choices. Lavish and luxurious, Ringo’s Sunny Heights epitomized  their new wealth and their exhaustion about what to do with their time. In a pensive moment during a 1968 visit by Roy Connolly, Ringo reflected on the four-room house he grew up in in Liverpool. “Sometimes I feel like I’d like to stop being famous and get back to where I was in Liverpool,” said the generally gregarious Beatle. “There don’t seem to be so many worries in that sort of life, although I thought there were at the time. I had to come here to realize that they counted for very little.”

Finishing 150 Glances, I suffered a tinge of melancholy by this peek into the past, a sorrow over so many poor choices, over so much foolishness. But then, they were only boys.