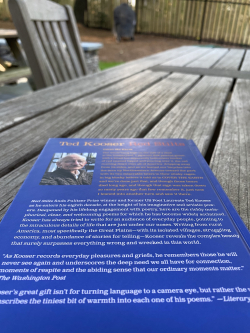 At the perimeter of the yard, huddled by the fence, lies our grill, veiled, like it is ashamed of its diminutive stature. Arcing above it is a maple that once near died but many years since has bent toward the sun and thrust upward, and the bashful grill there teeters, like a child with its newly-steadied mother, head buried in her skirts.

“I remember when that magnolia was only this high,” my wife said over our lunch, holding her hands about twelve inches apart. “And now look,” as she pointed out past the patio toward the corner of the back yard at a volunteer maybe 25 feet high, its rust leaf backs toward us. “It’ll probably never bloom,” she predicted. “It never has.”

I say something about lack of sun, to which she nods. But then I think, never say never. God majors in great reversals, changing seasons, upending the predicted.

I look down. An 80-year old Ted Kooser, poet, is staring at me from the back cover of his latest book, Red Stilts, his forehead wrinkled, sweatered against the cold, expression pensive. An old man. Yet still child-like in how he sees. “The garbage truck’s tires had left two keyboards/ impressed in the snow, with the shadows of threads/ for the sharps and flats, at least a hundred octaves/ reaching far into silence, and a tattered leaf/ appeared as if out of thin air, sat down, and started/ playing,” he writes in “Recital,” telling of the cardinals, finches, and juncos that, perched in nearby bushes, play audience, chirping approval. And that, for sure, is rendered with the eyes of a child, to hear music in the tire tracks of life’s dirt.

There’s a recital here too: the percussive beat of the nail guns tacking up one of the last new houses to be constructed behind us, the rhythm of the lawn mower’s whine, a circular saw that intermittently chimes in, and the twill and peep of birds peppering through.

The air has changed. Humidity is up. Rain is coming, someone said. Which makes me glad for a blue umbrella, a shelter for these thoughts.

“I watched a moth fly round and round the moon,/ or so it seemed as I stood looking up,” writes Kooser in “A Moth, a Moon,” and I think about the candle flies I scold that sometimes fly around the lamp I read by, somehow slipping by all our defenses, our closed windows and quickly-shut doors, as if they crawled on their bellies through the hairline cracks between window and sill, drawn by the light. But I take it back, let them fly round my moon, give in to their silent nattering, read on, only occasionally swiping away at their exuberant joy at light.

Something is amiss with our bird feeder, I note, the seed gathered on one side, inexplicably. “Probably a deer pushed it with its nose,” she says. Maybe. Or maybe the world is off balance. Askew. Lilting. And everything is off, spinning madly, needing someone to set it right.

I’m musing now about how “its impossible to keep the dust away/ from any color painted on Nebraska, despite/ the thin, transparent drop cloths of the rain,” as Kooser writes after ruminating on a greened out and flowering roadside ditch. So, for a moment I drive down a blacktop Nebraska road with him, as he sees for me, pointing out “the barns, in clear plastic slickers of rain,” the ones that “stand at the side of the muddy gravel road/ where they wait for the men to come home/ from the tavern in a fleet of old pickups/ awash in the misty gray waves of the hills.”

When once we yield to Christ, said Oswald Chambers, we are emptied out, the old nature replaced by the new. “The first thing God will do with us is to ‘force thro’ the channels of a single heart’ the interests of the whole world,” says Chambers. “The love of God, the very nature of God, is introduced into us, and the nature of Almighty God is focused in John 3:16—‘God so loved the world. . . .’” And that introduces a new kind of seeing, a love for the world—the cosmos—that apart from God we don’t have.

So, with Kooser, we can feel a kinship with the inanimate and animal, a birdbath or wheelbarrow, a squirrel or a robin—even a wooly caterpillar. “I came upon you on a sidewalk,/ black as a hyphen slowly crossing a page,/ as if you were trying to connect/ the last word in October with a word in/ the April to come,” he writes, stopping on a Nebraska sidewalk to see his inching neighbor who “looked like a casket being borne/ by a half-dozen soldiers walking in step,” a “casket [ ] draped with the flag/ of your country, orange like a leaf,” taking off his cap and bowing, “as they carried you into the distance.” Just a hyphen. Just a bridge between October and April. Just a bearer of the love that flows from God through us.

What am I thinking about? she might have said but didn’t. Everything. Hyphens. Ditches. Nebraska roads. Tire tracks. Moths and roadside barns and a veiled grill. What a few words will bear across the world. About the love of God shed abroad on every single square inch of all that is.

I look back at Kooser again, sweatered, bifocaled, a single sprig of white hair caught by the Great Plains’ wind, a man in love with the world in all its spareness and extravagance, its shadowed alleys and sun-filled rooms, connecting October to April, our fall with our redemption. That could be me one day, I think—minus the Pulitzer Prize.