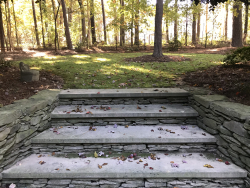 “These all died in faith, not having received the things promised, but having seen them and greeted them from afar, and having acknowledged that they were strangers and exiles on the earth. For people who speak thus make it clear that they are seeking a homeland.” (Heb.‬ ‭11:13-14‬)

Writing about the young adulthood of Georgia-born Leighton Wilson, early 19th century missionary to West Africa, Erskine Clarke draws attention to the impact of place on personality. “At some deep level of affection and self-understanding, he began to identify with this spot of ground, this particular place along the Black River,” says Clarke.

For Wilson it was in large part the natural world--pine forests, cypress swamps, and cotton fields--yet mixed in with the natural environment were more cultivated influences. “Leighton’s memory and therefore his sense of self became intertwined with this specific place as the place insinuated itself into his most elemental senses: the sound of the night wind in the pines outside his window, the fragrance of new-plowed ground in the spring, the feel of matted pine straw under his feet, the taste of food prepared in a plantation kitchen, the sight of winter smoke rising from home fires, and the light of a winter sun on the forest floor.”

That was the Georgia low country in the 1820s, not suburbia in the 1960s, and yet even the homogenized neighborhood of the 1960s and early 1970s that served as my childhood home had its on particular sights and sounds: the low voices of my parents around the kitchen table drinking coffee and reviewing the day, the lights of passing cars on my bedroom walls, the cicadas trill as the day ebbs, the smell of newly cut grass, the wind in my hair as I rode my red bike to the neighborhood pool.

A few months ago, I went back there. Not content to just drive through, I parked in gravel lot near the overgrown site of what was formerly the neighborhood pool and walked. In some ways it felt that a miniature of what I remembered and I too big to fit the diorama. And as I later told my sister, who asked why I went there, it was underwhelming: I couldn’t quite recapture that sense of what it had been like to have grown up there.

Leaving the car, I walked down a grassy knoll to the creek. The footbridge remained, as did the sidewalk to the pool removed many years ago, its location now overgrown by a mature wood lot. The concrete steps to the showers remained. I took them. Green tentacles of ivy snaked across them, concrete edges of the steps had crumbled in places, and edges blurred where dirt had washed over them and rooted grasses--and yet, inexplicably, they remained, going nowhere, landing in a forested glen.

I had a red bicycle I rode the five blocks between my house and the pool, sometimes bumping over the swishing grass of the park, sometimes speeding down the road, helmetless, wind whistling in my ears, crying out to my friend to wait, to wait up.

I removed my sunglasses. I wanted to see it as a boy of eight, bare chested, a shine on my face born of the wonder of the moment. I walked up the stairs and, turning, stood for a moment, closed my eyes and heard the sounds of children yelling and water splashing, smelled the chlorine, heard the sound of showers and chatter in the bathhouse, remembered climbing the fence after midnight one night and taking a swim with a friend.

Turning to leave, I walked through a mowed field that used to be tennis courts, crossed the road, and stared down into what had been a cleared area next to a creek full of minnows and tadpoles, and recalled the echoes of our calls in the bridge tunnels we traversed, like spelunkers. Now overgrown, the pale outline of a trail remained, and yet it was inaccessible. I stared down into a wooded area where my friend and I once built a fort from wood salvaged from a nearby construction site, fully intending to stay overnight. We didn’t.

I followed the road a hundred feet or so to a four-lane parkway that ran behind my childhood home. Stopping behind my house, I looked up at the windows. Gray painted siding was peeling. An old car was parked in the driveway, hoisted on blocks. Patchy and weedy grass licked the brick foundation. My eyes moved across the shuttered windows, following my path from bedroom to bedroom as I moved, as my siblings married and moved on and we were promoted to the next (and better) room, finally resting in the ground floor room with easy access to a door and adventure.

There to the left of the house, on that hill, was where I learned to ride my red bike. After some coaxing, my aunt placed me on it and pushed me down the hill, careening toward the four lane. I crossed our driveway, fell off in my neighbor’s backyard.

Turning the corner of the block, I circled around and stood in front of the walk leading up to my front door. There’s the window over the kitchen sink where my mother prepared our breakfast and dinner every day, day in and day out. As a child I pulled out a bottom drawer and climbed onto the counter to watch her peel and cut potatoes and carrots, snap green beans, mix lard and flour and roll out dough to make biscuits and laid their hand-rounded shapes on a greased sheet to bake.

There’s the double window in the dining room, the table where I wrestled with my homework, where my mother, already tired from her day, endeavored to assist me. On the wall was a picture of an old man praying, head bowed, hands clasped, candle burning, a piece of bread and chalice on the table before him.

Those steps were where I sat and tried without success to rethread the chain on my bicycle. Tears fell, inexplicably, as if riding again with my friends was the most important thing in my life. Seeing me there an older kid in the neighborhood, a bully who had never said a kind word to me, stopped. He fixed my bike and told me it was OK.

Clarke said of Leighton Wilson that his “experience of distant places would always be filtered through these early memories, and his voice, however tempered by other places, always carried the sounds and intonations of a Black River home.”

When my mother wanted to call me in for dinner in those years, she’d lean out the side door of the house, the one off the kitchen, and yell my name at the top of her lungs. I’d hear it no matter how many backyards away I happened to be. And I’d come.