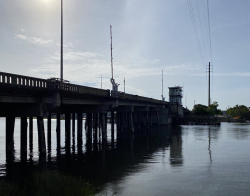 Light always gets in, I tell myself. Someone way different than me, and yet not, smiles and says hello as we walk past. People take up brooms and clean glass-strewn streets. She points to the sky, says “Look, that crow has something in its beak, orange,” and I manage to look as it skims a rooftop, passes beyond my seeing. A city worker cleans the sidewalk, looks up to greet us. Unemployment, quite unexpectedly, goes down. Someone planted flowers by the walk. A restaurant founded by Sam and Bo renamed itself Peace & Love. A biker nearly runs into me, then dismounts, says “I’m sorry, I know better.” She sews, I write, the cat sleeps; the sun dips lower in the sky, the moon rises.

“What’s on the calendar for tomorrow?” she says.

“Nothing but an all day appointment with you,” I say, which earns a smile. Light. A pandemic swept in and cleared out my days, baled me out of busyness, interrupted my self-importance, renewed my friendship with our four square where splintered sunlight shines through chinks in the pines.

We get takeout. Park facing a field or wood lot for entertainment, hoping for a cat, bird, swaying pine, rustling leaf, a surprise. It’s happened before. A bit of sunlight nettles its way between the trees that stolid, comfort and reassure. I crack a window, take in a couple inches of air off the Atlantic with a hint of the Gulf. Trays, green placemats, condiments aplenty are summoned, hands held, thanks returned.

Sometimes we play a word game, words from jumbled letters, hewing new brain cells to replace ones we are fast shedding.

“Ummm. . . .What’s that laser thing that just fired at your words?”

Once, a couple weeks ago, we were having a form of takeout--yes, let’s call it that--parked in her now takeout food-infused vehicle, slurping down a box of sugar-encrusted, diet-breaking, but oh-so-sweet Krispy Kreme doughnuts, and she let go a little chink of light. “I like the way you do things,” she said. Just out of the blue. Suddenly, I felt emboldened. I had another doughnut. That comment, buoyed by three doughnuts, powered me all the way home. It doesn’t take much.

On that walk this morning we saw a loon staring pensively into the distance just below the drawbridge, as light played off the water. Thinking about civilization and its discontents, I suppose, or where the next meal was coming from. It flapped away before she could snap a pic.

Tide was up. Reed-covered water sloshed beneath the walkway as cars tracked overhead. Crossing, the world shook beneath our feet. We go down, crossover, take the less-traveled path under the oaks, speed up and pass a doddering millennial couple with a baby in tow, giving a wave as we track round.

People all matter, I remind myself. Dogs matter. The crabs burrowing in the mud matter. Everything matters, I think.

Every dog we see has light in his eyes, strains at their leashes to meet us, to say hello, to sniff and wag and slather, until brought up short by a leash, protesting.

We forgot to pray, or maybe we did pray. Sometimes we are just deep in our own thoughts. Me, I have an inner conversation about what everything means, a running argument sometimes, fierce. Sometimes I think about what’s for lunch.

“Do not love the world or the things of the world,” said John this morning as I squinted at the print of his letter, and then he tells me it’s all passing away anyway. But he’s talking about “the desires of the flesh and the desires of the eyes and pride in possessions.” Not the marsh, moonlight, mint, or mockingbird that performs its great repertoire each morning at our car park. Not the squirrel that crossed inches from our feet. Not the heron. Not the “pearl sky raining light like hail.” Not the people trying so hard just to figure everything out.

We “were darkness but now we are light in the Lord,” says Paul, whose light falls all around us. No matter where or when you are, no matter how stolid the barn of indifference, no matter what walls we build, light always gets in, climbs up the bales, and, one day, will cover us in its shine.