The Kinship of Things 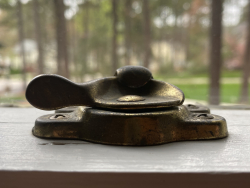 I was away recently.

Sometimes, when we go on vacation or are away for an extended period of time, I feel a twinge of sadness for my house, for all the rooms that are unattended, unread books murmuring on the shelves, walls ready to hear words, flatware in the drawers yearning to be taken up, floors longing to meet feet trodding, windows pining to be looked out, tables awaiting the press of elbows reclining, a reading chair unread, unoccupied. I lock the door behind me and turn away, and I feel the house’s tentacle of need reaching out--need to be loved, to be occupied--and as I walk away I feel a vague sense of betrayal.

Man may be a little lower than the angels, an image-bearer of God, yet there is still a kinship with things.

When I am away, I sometimes think about what is going on in the house. Morning sunlight stretches across a den floor as the sun travels across the sky, and dust particles float suspended in the air before settling softly into the carpet, onto the end table, grasping the slender lamp harps. As the sun rises, the light contracts. A shadow of a cloud darkens the rooms, momentarily. The last glimmers of the sun rest on a chair where I often read, glints through the pines, slips behind a neighbor’s home. Shadows deepen. Night settles and the streetlights and porch lights from other houses illuminate the rooms. A streetlight flickers on. A black cat sets up a neighborhood watch.

Time is passing. The microwave announces hour and minute in blue. Our remaining analog clocks tick, tick, tick, measuring time for no one. Water waits in pipes, ready for taps to open so it can be on its way. The refrigerator condenser fan hums and falls silent, hums again and falls silent. The furnace wakes itself from sleep to blow as needed, though it’s not much needed, and no one says “it’s too hot” or “it’s freezing in here.” The darkened screen of the television flickereth not. Photographs look out on vacancy, call out to no one, smiles frozen. Piano keys await fingers, strings taut and ready. The house waits, through the hours of the night. Tomorrow, it wakes, and does it all again.

While I was away, I was reading Amor Towles’s novel, A Gentleman in Moscow. His protagonist, Count Alexander Ilyick Rostov, 30 years old, is confined by the Bolsheviks in 1922 to the Metropol Hotel under orders that if he ever left the hotel he would be shot. The Metropol is a grand hotel—as in The Ritz in Paris or Plaza of New York—yet, still, Rostov is a prisoner, stripped of his freedom and evicted from his spacious suite and exiled to the sixth floor attic rooms. And yet, he finds a way to plumb the beauties of the hotel and its various personalities, and live a full life.

We’re all under a moderate form of house arrest these days—locked in. Our confinement is more social than physical, more a disruption of familiar habits and physical contact than confinement. We chafe at our restrictions. Yet lately I’m reminded that with constraints comes opportunities, even creativity, and a renewed love for things we take for granted.

My infant son, “confined” to a playpen, bed, or room at a young age, given no more than three toys, would create far more than if given ten things to occupy him. My mother, a child of the Great Depression, used to tell me how she and her brothers and sisters milked a day of play out of an old tire and a stick. And given paper and pencil during an eternally long sermon in my childhood, I produced elaborate maps, drawings, and plans for neighborhoods and cities.

So, I’m trying to learn the lesson of constraints. I sit in different places in the house, stare out different windows, to see if I have different inspirations, new thoughts. I listen to squirrels scamper across the roof, raindrops drip-drip-dripping from the eaves, a cacophony of birds who have no fear but sing. I just listen. I take inventory, discover misplaced scraps of writing, old notes, and cards. An old CD, pulled from its shelf and played, transports me--sometimes to the place and time I bought it, even a conversation about it.

I sleep more, dream more, and awake in the night more, listening to a house content to settle and creak its happiness to be filled, to be needed.

I keep my neighbors at a distance, and yet hold them close.

I pray longer. I add prayers to those already etched in the rooms of this house. Old conversations linger and poke at my memory. God fills up the house and always did, so I walk around looking for Him, talking to Him, walking with Him to show me what He sees, what He knows.

I play more music, the sounds waltzing through the rooms, and I sense the house must be glad to be needed, to be occupied, to be found again, to be noticed, to be attended, to be a home.

Sometimes I go outside. I stand in the backyard and look at the house’s roof lines and right angles and windows, its chimney, shutters, and downspouts. It may not be the Metropol or Ritz, but its mine, I think, and looking at it I feel something like love. Then, full up, I go back in and attend to it, thankful for its kinship.