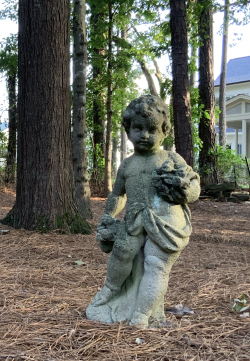 At the end of that day—Labor Day—a spray of quickly vanishing sunlight bathed the side of a new home constructed behind us. Falling so quickly, I can watch a diagonal shadow creep up the house wall, the sky’s blue deepen, the sun itself dropping, squeezed between the pines. And now, twilight settles in. The cicadas’ song swells and ebbs.

For many people summer ended with the close of that day. They’ll sputter back into their driveways by early evening, sunburned, put the grills away, clean up, and figure out what to do with the rest of their lives. Tomorrow is a workday for most, an odd Tuesday that feels Monday-like, and the sense sets in that the next day will be the same. And the next. And the next. And the little summers of the weekend may come too seldom, like em dashes betwixt our sentences, punctuating the little dramas of our lives.

But wait. This is beginning to sound like a country song. Before you know it, the truck will break down, the dog run off, and Ruby will take her love to town. There’s more to it, right?

Walking this morning, I made note of the operation of the second law of thermodynamics. I don’t really know anything about that particular law, even if I am a lawyer, but I know it has to do with how things move toward entropy, or disorder, over time, and disorder is something lawyers created. Well, actually Satan did. But let’s not quibble between taskmaster and henchmen.

Sidewalks were cracking. Untended yards grew weedy and unkempt. A carport held a virtual junkyard, spilling out into a mildew-stained driveway. On some homes, paint peeled or faded. Someone parked mattress and furniture castoffs behind a strip shopping center. Dumpsters yawned in the early morning sun, chasms of detritus.

Yet all this is external. The saddest entropy is what lies behind the walls. Busted-up families. Opioid addiction. An unraveling moral code. But there’s more to it, right?

We let a few prayers snake up over the trees that lined the walk, got off a few shots into enemy territory, whispered “thy kingdom come.”

That prolific English theologian, N.T. Wright, reminds us that “thy Kingdom come,” that second petition of The Lord’s Prayer, isn’t about some otherworldly place but about the here and now. “Earth is our world, our space,” says Wright. Think of the picture of the kingdom coming in Revelation, he says. “It isn’t about humans being snatched up from earth to heaven. The holy city, new Jerusalem, comes down from heaven to earth. God’s space and ours are finally married, integrated at last. That is what we pray for when we pray ‘thy Kingdom come.’”

It’s dark now. Yet windows of light appear in the darkness, shine rectangular pools of light on lawns and forest floors, like promises of a rising sun, reminders of the day.

I saw other things on our walk: Manicured lawns. Tended flower gardens with blooms spilling through fence slats. A man running toward us smiled and waved. A cross walk signal that worked. Streetlights that burned and flickered off in the new day.

And our little prayers--just murmurings above the din of the world--took rest with others at the altar of a Father who answers every plea, every thy kingdom come, on earth as it is in heaven.