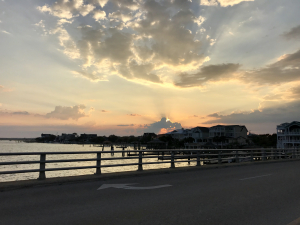 “Joy, which was the small publicity of the pagan, is the gigantic secret of the Christian.”

Flying west from the coast we were silent, each in our own thoughts, the asphalt singing under our wheels. A few drops of rain were cast from the sky in some eastern county, leftovers, quickly brushed away by the slap of the wipers. I tilt the visor to ease her view when the sun presses through, watch her from the corner of my eye paging through a magazine, bright pictures shining in her eyes, her attention rapt.

We lit out from home three days ago. Our passenger, corralled and cabined, kept a wordless watch in the back seat. Only an occasional, soft complaint escaped her lips, more reminder of her presence than cavil. Once reassured, quiet, she settled into an uneasy rest.

Our plan was as always. Go to where the road ends. Dock. Covertly hike the sky, our rattling porter announcing our coming. Speak to no one, firstly. Unlax into the spell of habitation. Lay claim to the waters. Bask in the Sun. Let words fall over us. Feast. Be of good cheer. Take heart and put courage in each other. Go out among the English, finally. Watch the sky. Let waves break over our minds. Sit together. Roll the dice. Ink letters with the smooth point of a pen, impressing words on pages, mouthing their sounds. Draw from the well of memory. Bask in the Son. Row gently, softly, steadily across the waters.

One fair day we spied a heron in the long grass, alone. Stealthily we rowed the shallow brackish pools of Middle Marsh, our oars windmilling through the salt air. Below, oysters resting in their beds looked up at us, their pale hearts winking, their muckish home sliding past. A finger trailing water plowed ripples that lapped up on reeds.

Half-way in, people, like aliens, surprise us. We hale them as they slide quickly past, leaving us alone. We meander, thrust our noses through sloughy isthmuses until freed we enter open water. At end, we turn, let the tide carry us back out, as she wonders aloud where the water has traveled from, how far it has come to be with us.

How far He has come to be with us, I think.

A day later, we let words escape into the air above the marsh as we walk round its perimeter, hearts beating time. We offered thanks, registered complaints only to withdraw them, made supplication. She greeted man and woman along the way, as I did, sometimes. At the bridge she stopped to peer over, as she always does, as my feet itch to go, go is what they know. But I stop, because she sees better, sees more: High tide. White heron. Wind tickling water. Boats, lifted, basking in the sky. Happiness incarnate in canine cover.

Sometimes, leaving, I consider turning around and going back. “Do you want to go back?” I say. She smiles. “Of course.” But I don’t, the longing unrequited.

The rain has started again. The wipers, unbidden, do their work. Soon the water will be gone. Soon the rain will end. Soon all will be wiped away. Soon, we’ll turn into the long drive of home.