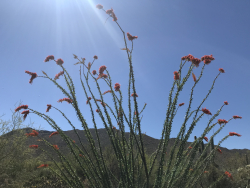 For a while this afternoon, I lay in a hammock suspended inches above the pine straw floor of my backyard. The cords of the hammock are blackened from years outdoors, and it lists precariously, requiring one to lay not dead center but just off-center, askew. It suits me. Balanced there, hammocked between earth and sky, I watched the light slant across the lawn while a still cool breeze lightly brushed my skin.

A week ago we left our digs in the Catalina foothills and headed west for the Tucson Mountains, one of four ranges that ring Tucson. Climbing the turns of Picture Rocks Road, we crested the pass and, like always, caught our breath at the view on the other side—sloping red-rock mountainsides and foothills thick with the green of sahuaro and prickly pear cacti and the yellows blooms of the green-trunked palo verde trees. As the hills bottomed out, the Avra Valley’s shimmering desolation caught the sun. Exclamations similar to those uttered in the past escaped our mouths as we pressed on. Off to the northwest, the sunlight glittered off the groundwater recharge basins of the Arizona Aqueduct. The sun remained in the eastern sky, the temperature rising but still moderate.

I opened my eyes to the canopy of trees above where I lay, imagined branches tickling the sky, swaying in the wind. A robin hopped across the lawn. I remembered the mockingbird performing atop a house’s weathervane earlier that day, working its repertoire, and the two geese who uncharacteristically were perched on a neighbor’s house, trumpeting to wake the sleeping inhabitants, before flying off wingtip to wingtip for the lake beyond. I closed my eyes.

Off Kinney Road we found Hohokam, a dirt-packed backcountry route that snaked back over the foothills. At a T-intersection with Golden Gate, we turned right leaving a dust cloud in our wake. A mile down we came to the trailhead for the Sandero-Esperanza Trail. There were no other cars in the dusty lot, and as I opened my door the refrigerated air gave way quickly to the parched air that traveled here from the Pacific, air that stirred over the Joshua trees of the Mohave, the ocean moisture wrung from it, before stroking me.

The first mile of the trail was fairly easy, as it made straight for Wasson Peak across the desert floor. As we walked whiptail lizards scurried off trail, and occasionally a chipmunk ran ahead of us until veering into the brush. The last almost mile was a strenuous climb, the trail switchbacking up to the ridge line where over a hundred miles away you can see the mountains of Sonora, Mexico.

A blue jay alights on the fence encompassing the yard, surveys the scene, before flying to a shrub nearby. A hummingbird—unusual in my yard—flits low amongst the undergrowth of my neighbor’s yard before I lose it in the forest. The sky is open above me, hemmed in only by the canopy of green overhead.

Some people speak of desert as if it is wasteland. Yet it’s not. Life abounds in the Sonoran Desert, whether it’s a cactus wren or coyote, a rattlesnake or roadrunner—though much of it is nocturnal. The advantage of this time of Spring is that everything is blooming: yellow Palo Verde trees, red-laced branches of ocotillo, flowering sahuaro cactus, and wildflowers dropped gratuitously across the desert floor. Lush, if dry conditions prevail—the brown desert floor giving way to green vegetation and then on to cobalt blue sky where the contrails of jets from Douglas Air Force Base streak, their endings breaking up into the blue.

Sometimes I look out on the cholla, creosote bush, and sahuaro; on the red-rock hills, jagged peaks, and uncountable grains of sand; and on the emptiness of the blue that envelops it, and beyond to the vast and largely empty dark matter of space—and I feel the push of sadness even in the beauty of the place. If no Love was behind it all, if He was not there and not present after all, then no one would care about this place, and as night falls it would not even be forgotten as there would be no one to forget it.

Yet “God so loved the world.” That changes everything. That ever-present, ever-pursuing and radiating love means that everything here is constantly flooded with a Creator’s love and omnipresence—like a hovering and caring parent—even in the loneliness of a winter night or sizzling heat of a summer day. No one and no thing is alone.

The wind blows and tilts my hammock. The sun sets. At anytime my wife may peer through the second floor window into this twilight, cradling our laconic cat, and see me lying here. She will know I do not slumber. She will know where I am.