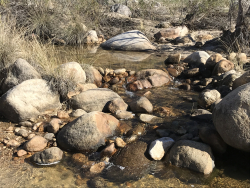 “Saying nothing. . .sometimes says the most.”

“Virgil, you stand right there. I have to pay.”

Virgil is white-haired older man, a barrel cactus of a man, with a large square head topped by a ball cap. Large tent-like dungarees hang from his waist. He’s standing in front of me, completely obscuring the seated ticket-taker.

“No Virgil, you stand right there. That woman right there will be your driver. You’ll go with her. We’re going to walk up.”

Virgil stands there, unmoving. His hands rest at his sides. Connie, the blond-haired woman doing the talking, is paying. Her friend Joanne tells me she is from Oracle, or Oro Valley, or Elroy--I can’t remember--and her sun-bleached hair and crinkled skin is evidence she’s native. But Connie is from Michigan, is visiting, and has never been to Sabino Canyon before.

Virgil still hasn’t moved. Beside him, Connies’s laconic teenage daughter looks out over the desert, over the prickly pear, saguaro, and yellow-flowering brittle bush, toward the mountain slopes of the Rincons. Yet I suspect she doesn’t see them, doesn’t know that Rincon means corner, that the corner of the range is made by the three peaks of Mica, Tanque Verde, and Rincon, that between the Rincons and the Catalinas, where we will walk, is Redington Pass. Her cell phone with no cell signal is dormant in her hip pocket, beckoning, and her mind is in Michigan, wondering what her friends are doing.

We could be nearing 100 times of hiking in this canyon, spread over nearly 35 years. And when you have done something that many times, incongruities offend, are personal.

“Where are the trams?” my wife asks. Unfamiliar enclosed green buses stand ready to shuttle us the nearly four miles in and back. “Why is the ticket booth shuttered?”

The woman behind a folding table taking payment assured us that new open air trams were coming and that the ticket booth would be replaced by a kiosk where you could buy your own tickets, that in the future you could buy tickets online, on the tram, or at the self-service kiosk. It’ll be better, she said, more convenient.

But I don’t believe her. I liked buying the tickets from the crusty old woman behind the window who acted like she was doing me a favor when we made the exchange, when I slid cash across the portal and she laid an orange or green ticket on the hand-slicked counter and pushed it toward me, the ticket that the tram driver would collect and tear and return in part to me. And I don’t want a green-friendly tram but diesel fumes and creaking connections and the slight anxiety I felt as we passed over the six narrow bridge crossings accompanied by a very-human narration of canyon sights and lore, the words of which we mouthed from memory as the driver made his case.

There’s the cliff wall that some climb, he’d say, the face in the rock, the formation that looks like Snoopy on his doghouse withWoodstock too, the place where in 1948 thirty-three year old Deputy John Anderson fell to his death after rescuing a kid who was stranded on the ledge below. He’d tell us how the stone bridges were built during the Great Depression by the CCC, the Civilian Conservation Corp, about Hollywood in the canyon, about the great flood of a few years back. He’d point out the Mexican oak, mesquite, saguaro, and cottonwood. We’d listen like it was a song of which we never tire, and we don’t tire of it, as the landscape is alien--not as foreign as it once was--yet like a home you only see once a year.

This time we walked the nearly four miles into the canyon to the turnaround, unwilling to pay for an enclosed shuttle. We started boldly, like horses out of the gate, straining against the reigns, yet we soon slowed--the road winds slowly, gradually, yet relentlessly uphill, with a sharper climb at its apex.

Sometimes we were alone and all we heard were the calls of quail and doves and cactus wrens, the sometimes trickle of the creek, the wind rubbing against Palo verde limbs or soft in the Mexican oak branches or, when gusty, the creaking of the Sahuaro cacti. On three bridge crossings the spring-melt flowed over the bridge to perhaps an inch depth, and we walked on our heels through it, penguin-like. When we passed others my wife greeted them, yet over half of them did not acknowledge her, an astounding statistic even if only anecdotal, yet they may have their own preoccupations. We had ours.

Sometimes we are are lost in our own rumination, other times reviewing some event or previewing what’s yet to come. When I am too lost and forget to listen, she takes my hand for a moment, summoning me back to us, to footfalls on pavement, to the whip tail lizard spooked by our passing, to a rocky outcrop that we photograph every year with the sun bleeding out behind it, the rock haloed--to remind me, without words, that “We are here, together, now.”

And I am lost, sometimes, with prayers worried out of me, petitions that begin to mire in circumstance yet when they bubble out escape my hands and waft up over the canyon walls, where God hears. I let them go. I exchange them for gratitude, for some remembered promise, like ““Fear not, therefore; you are of more value than many sparrows” (Matt.‬ ‭10:31‬ ‭ESV‬‬). His eye is on the sparrow.

On the way down we pass Joanne and Connie and the daughter heading up. We say hello. Passing, I turn back and say, “How’s Virgil?”

“Oh, he’s riding up and down on the van,” says Joanne. “We see him pass sometimes. He’s having a great time.”

We walk on. Sabino Creek moves on, and somewhere after it exits the park, it drops down below ground to move unseen, and we say it is gone, that it has dried up. But just because we can’t see it doesn’t mean it’s not there. 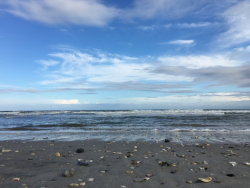 “Dark times are allowed and come to us through the sovereignty of God. Are we prepared to let God do what He wants with us? Are we prepared to be separated from the outward, evident blessings of God? . . . . Until we have been through that experience, our faith is sustained by feelings and by blessings. But once we get there, no matter where God may place us or inner emptiness we experience, we can praise God that all is well.”

(Oswald Chambers, My Utmost for His Highest, April 4)

My daughter reminded me when walking on the beach last week that the shells that crunched under our feet are the remains of dead animals: snails, coral, and the like. And I know that the sand itself is what’s left of quartz rocks that made their way to sea and via wave and water are now honed down to their rock hearts. Today, children play on this burial mound under a blue-white sky, moving the remains around with brightly colored buckets and shovels while parents talk or read. Sun wash blinds to what is really happening; the seen masks the unseen.

We are often unaware of where we are, of what we live atop, of even who we are-that our lives are built atop the lives of those who have gone before us, whose names are lost to the depths and ebb and flow of time.

Amid death and decay, there are beautiful certainties that the prophet Jeremiah (Chap. 31) reminds me of: grace in the wilderness, everlasting love, life like a watered garden, mourning turned into joy, gladness traded for sorrow, satisfaction for the weary soul, replenishment for the languishing soul, and then this: “And it shall come to pass that as I have watched over them to pluck up and break down, to overthrow, destroy, and bring harm, so I will watch over them to build and to plant, declares the Lord” (Jer. 31:28).

Pruning. Creative destruction. God plucks out waywardness, dependence on anything but him; overthrows self-regard; destroys the lust of eye and flesh-all towards the end of rebuilding and replanting us in new patterns, in tilled rows of earth and sky.

“I love watching the waves, the tides,” says my wife as we walk, “because it reminds me of the constant love of God for me.” I think about the violence of the love, the constant wearing away of the shells and grains of sand, the smoothing of the line where land meets sea.

God’s love is no sentimental love, no pandering love, but one that strips away the old to make me new, that sometimes takes me through darkness so that I will cling to Him all the more and know a love that will not let me go, a relentless love that breaks down even as it builds up, that tills and plants.

Farther down the beach, two women walked toward us, heads cast down, examining shells. As we neared my wife dropped a translucent green piece of sea glass behind her, a gift for the observant. We passed. Turning back, we saw one woman stop, exclaim, as she spied and scooped up the sea glass.

We walked on, smiling. That’s how it is: even in death, glory; even in worn-down remains, beauty. And surprise at what treasure God brings.