A Map, a Lamp, an Alien World 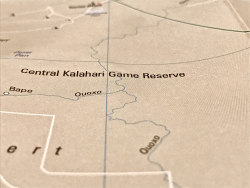 “About thirty miles south of the main road, the track we had been following led us to the edge of a vast plain. Then it disappeared. . . .[W]e came to an immense network of saucer-shaped salt pans interlaced with crescents of grass savanna, touches of woodland, and wisps of palm islands. Some pans were filled with brackish, unpotable water and flowery masses of orange, purple, green, and red algae; others were covered with a thin salt crust. We were at the edge of an alien world---no roads, no trails, no people.”

From Mabele, Botswana you can hire a boat to take you out onto the waters of the Linyanti Swamp, where you can close in on elephants standing deep in the water, wrapping their trunks around the reeds and pulling them up by the roots, shaking their great heads, ears flapping, to free them of water, and stuffing them into their cavernous mouths. Across the swamp lies rural Namibia. Natives move about between round thatched huts that dot the landscape and wave from the shore.

From Mabele you can take a road through Chobe National Park, entering at the Ghoha Gate, camp at Savute, and then motor on from there to the Moremi Game Reserve, in the Okavango Delta, one of the prize wildlife regions of Africa. Much of it is a dirt road, and the ride in an open air Land Cruiser can be punishing: The wind dries your skin, a relentless sun sizzles, and dust accretes on your clothing and skin.

On the map Botswana seems contained and manageable. Solid, reasonably straight yellow lines with hopeful numbers like B334 lead from Kasane, near the border with Zimbabwe and Namibia, as far as Muchenje, near Chobe’s Ngoma Gate, and from there a lesser white line leads to the Okavango, a line which grows thinner and less distinct as it goes, suggesting change---and yet the clarity and certainty of the line reassures.

On the ground the going is less certain, though no less colorful as lines on a map. A rustle in the trees along the road may portend a gray mud-caked elephant, who crosses ahead of us. Giraffes’ angular heads and craning necks may bob above trees as they winnow the leaves and lope across the plain. After rains, ruts may appear in roads and the going becomes circuitous, the Land Cruiser weaving from side to side in the road like a drunken load of partiers homeward bound from a late night bash. Roads lead out into the bush, only to peter out in brush or be blocked by a tree pushed down by an obstructionist elephant. In swamped roads the Land Cruiser sinks, water sloshing up above the running boards---none of which appears on the map. Signage is often lacking, so you depend on the driver to ferret out the way, or make a new way.

I’ve pored over maps since I was a child. It’s no crime: I slept with Rand McNally, a dream on each page, a promise of adventure. Most fascinating to me were areas---then, the Western United States, and now, the Kalahari Desert of Botswana---that looked vast and empty and mysterious, or that had the faintest and loneliest of markings. In large areas of the Kalahari, there aren’t even the faint lines designated as “tracks,” which are appropriated animal corridors---vast empty places like the white space on a page of poetry. And the names on the page---Kumchuru, Kkhomodimo, Tshwane---are like one-word poems, beckoning across the miles of desert, punctuating the unfolded sheet of Africa. My eyes land on Deception Valley, and it’s a reminder of Picasso’s summation of art as “the lie that tells the truth.”

A map deceives even as it tells the truth. I haven’t been to the Kalahari, yet I know that the vacant blotches on my map are not empty. Inside the cover of Mark and Delia Owens’ 1984 book, Cry of the Kalahari, there are named pans and hills and valleys that populate all that empty. Their seven-year adventure living in an unexplored area with no roads and no people but rich in lion, leopards, and hyenas is rich in detail. They survived, if barely. But the map gives little hint of the unforgiving nature of that land, only the single word: deception. To know the poem that is Africa, you must go there, just as you would go anywhere. You must walk among its lines and words, its pans and plains---all true, but more true in the living.

The Psalmist may have said more than he knew when he said “Your Word is a lamp to my feet and a light to my path.” As a map the Word is essential. Yet its interstices---all those open spaces and pans and hills and valleys hidden there have to be named in our walking. We have to get down in it, mine the poem for all it means.

I just put a finger on the map, at random. Underneath is a single straight green line that demarcates the edge of the Central Kalahari Game Reserve. There are no towns or safari camps where I landed, just a thin white line that tracks the wild. It’s likely that no one lives there, that weeks and months pass with no human being walking there. Yet even there God moves. His Spirit hovers over the plains and salt flats. He knows every springbok and lion, elephant and jackal, wildebeest and bat-eared fox. No map can do justice to that wild particularity. One day I’d like to walk that alien world with Him, the full moon a lamp unto my feet.