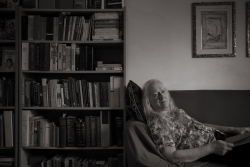 Hosts assume that persons dining alone want to sit at a bar, presumably where they won’t feel so alone. They’re often wrong.

I slide into a cavernous coop made for six people, back to the kitchen, face to the door. Plenty of room for me and my friends, the ghosts of past conversations, the phantoms of a long memory, or for worlds conjured up by words.

I dine alone once each week, an introvert’s allowance, a pittance for my sanity. I need time to process. I need time to observe and reflect. I need to do a little life summary, take my pulse, make sure I am still living and not just existing. I need to get away from the phone, the screens, the. . .well. . .people. I recognize that it would be problematic to do this every day. But I don’t.

Penny is the server. She calls me honey. But here in this corner of the South, in this particular restaurant that doesn’t cater to transplants or the hip, there’s no romance in that sweetness, just hospitality.

“Is Penny short for Penelope?” I can’t hear Penny without hearing The Beatles’ “Penny Lane,” its “in my ears and in my eyes/ Here beneath the blue suburban skies.”

Sure is. Penny is probably in her Forties but looks like she’s in her Sixties, aged by smoking and life’s burdens. Penelope seems too fussy; Penny, too girlish. I give her my order. She whisks away yet continues to supply copious amounts of ice tea to fuel my meditations.

I’m reading an article in the New York Times Magazine, a lengthy feature by Jack Hitt entitled “The Strange Case of the Missing Joyce Scholar.” Hitt is chasing down what became of a renowned Boston University professor, John Kidd, a James Joyce scholar who two decades ago simply disappeared. I have never heard of the man. Never read Joyce’s Ulysses either, and certainly never knew of the insane obsession that the novel is for certain folks. None of these people would deign dine with a denizen like me. The author ultimately locates the Gandalf-ish looking Kidd in Rio de Janeiro (of course) still very much alive and obsessed with yet another novel.

While I read Hitt’s article mostly for the journalistic chase, his dogged pursuit of the facts, the heart of it was found in what was to Hitt perhaps just an aside, a tangential observation. Hitt is commenting on Kidd’s compulsiveness, such as his obsession over the size of a period at the end of a paragraph of Ulysses, a giant black dot on the page at the end of the last chapter featuring the novel’s protagonist, Leopold Bloom. Essays have been written on the dot which, according to Hitt, “ends a long, hilarious chapter that parodies the kind of crisp, cold tone associated with scientific discourse,” as if Joyce is saying, “Just shut up.” Essayists opine otherwise, of course. As Hitt summarizes, “Some see the big dot as Earth, viewed from the heavenly throne of God, who is often understood to be the annoyingly precise narrator of this chapter. Some think it’s a black hole or maybe Bloom’s open mouth, finally collapsing into sleep at the interrogator’s moronic questions.” I won’t even mention some of the more lively (or profane) interpretations. What I can say is that reading about such tripe in a place frequented by blue collar workers, to people who deal in the brick and mortar of life, is a surreal experience.

“You need anything else?”

“Stay as long as you like. We’re open until eight.”

“I won’t make it quite that long.” It’s only noon.

Hitt gets to the point later in the article, as he addresses Kidd’s compulsion for completeness:

“Theorists who study folk art sometimes describe those crowded, image-packed creations, like Howard Finster’s ‘Paradise Garden’ or Grandma Moses’ ‘Country Fair,’ not merely as a prominent theme but as a kind of mental illness common to the form. They argue that these artists’ works are expressions of a compulsion to fill an existential emptiness. This anxiety has its own Latin name, horror vacui, fear of the void — and Kidd brings this intensity to his understanding of every book he reads.”

Horror vacui. People like Kidd and other “artists of completion” help us see in sharp relief the void in a human life lived apart from God, even if that void is hidden beneath a veneer of distraction or steady soliloquy of self-love . Considering why people commit suicide, Walker Percy said “We do not know where we came from, why we are here, or what comes at the end. We do not know what it means to have a good life or a good death.” Kidd’s compulsion masks the fear of the void; obsession hides emptiness. All of which is tragic of course, part of the brokenness of a God-denying yet Christ-haunted world.

“There is a God-shaped vacuum in the heart of each man, said Blaise Pascal, “which cannot be satisfied by any created thing but only by God the Creator, made known through Jesus Christ.” God gives us someone like John Kidd to show us the extreme, to bring to the surface what lies at the soul of every person. For Christians, Christ is our holy obsession. Completeness is found only in Him. The Apostle Paul says “to live is Christ, to die is gain” (Phil. 1:21). Meaning can’t be made up. We can’t self-define. Meaning is part of the givenness of life, a gift.

Penny is back, this time a bit awkwardly (for me, anyway) she sits across from me, refilling the sweeteners and jellies at the table. For a moment I wonder if she is aware of the void in her life and how she fills it.

“Don’t mind me,” she says, as if she were non-existent, a non-entity. I know better. Everyone is to be minded. Everyone matters.

As for John Kidd? Pray for him, that his void might be filled to overflowing with the death and life of Christ. God takes strange cases. He gets to the bottom of our empty. Then, He fills us up.

I left Penny a good tip, but I should have offered her more. Next time, I just might.

[The photo of present-day John Kidd was taken by Lalo de Almeida for The New York Times.] 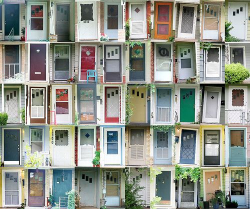 “Life may be uncertain, our neighbors may be afraid, and we may be disappointed by all that is unfolding. But these things, though significant, are not the ultimate realities. The tomb remains empty, God’s promises remain certain, and Christ remains King.”

(Dennis Haack, in Critique: A Magazine of Ransom Fellowship, 2017:4)

“I won’t be working here as much,” she offers. “I have an internship.” She says it like it’s the best job in the world. “I get to work outside and meet people.” She smiles broadly, her eyes bright.

“You’ll be good at that,” I say. Or maybe I just thought that. I envy her energy, the zest in the face of life. It’s doubtful I would have remembered Maria’s name, given my self-absorption at times. My wife is far better. She types the names of servers into her smartphone with some clue about their appearance (short, brown hair, smile) and then reviews them before we enter a restaurant as an aid to memory. But I have gotten modestly better at valuing people, particularly servers and other service people: I look up, catch their eyes, smile. Sometimes.

I took the day off. We parked single-wide (our slight, feline waif) at the spa a/k/a vet, ordering up all the first-class accoutrements of her stay, and headed east, toward the coastal plain. Somehow, just east of the Piedmont, the city in my exhaust, stress falls away. “I wanna live on a boat and sail away with my children,” sings Steven Delopoulos, and I nod. My wife says, “so do I,” and yet the children are now too big for the boat, and we don’t have a boat anyway, but we’re thinking about kayaks. We are. We say that all the time.

“Can I refill your drink,” asks Maria.

“I think I’m OK for now,” I say. I peer over the edge of my cup. It’s nearly full. Yet she’s so excited about refilling my drink. “But thanks.” Maria springs away. She returns, repeatedly, until I down four cups of iced tea and accumulate a stack of used artificial sweetener packets which, I know, I know, cause all kinds of terrible things, according to the internet. But I can only work on one problem at a time. First I need to remember peoples’ names.

Things are looking up. I just got a full house and took the lead by four points in our game of Yahtzee. I hand the smartphone back to my wife so she can have a turn. “I want you to win,” I say. And she does. She’s highly competitive; I’m such a loser that I’ve gotten to where I have learned to enjoy it, like I’ve signed a non-compete clause with life. Plus, she smiles when she wins. But she smiles when she loses as well. I can’t go wrong.

On the drive down I thought of the call from my friend yesterday and the consequences of bad decisions he labors under, things Maria likely hasn’t lived long enough to see. I gave him the strongest thing I could give him, a prayerful coda to our talk, and driving down I thought of what a small thing a prayer can be and yet how the scrap of it, rewritten by the Spirit, a prayer Post-It, sits even now before the Father, handed up by the Son.

“Those flowers are beautiful, a yellow that’s unusual,” says my wife. I look out the window, see the rows of flowers in bloom by the road, planted by workers with the Department of Transportation. Behind that are the ubiquitous pines in the right-of-way, and then the fields tilled by those who still farm, and up beyond that, a cobalt sky softened by building cumulous clouds and lit by a sun that comes up, unfailingly, every single day - life rolling out moment by moment, just plain goodness and beauty and truth breaking out all over.

I don’t know what animates Maria’s good cheer, whether a repository of common grace, natural predisposition to optimism, or Christ indwelling. There’s a lot wrong in the world. Underneath the happy veneer of distraction, many are afraid. As writer Denis Haack suggests, “[i]t might be wise to resurrect a biblical greeting that was used when God’s people faced uncertain times - ‘Be of good courage.’” Or, because “courage” actually derives from the Latin word “cor,” which means “heart,” I want to say to my friend, and you, and even myself, “Take heart. Sin casts a long shadow over your life and that of others, and not everything can be mended here. Yet all is not lost. Like a flower pushing up through the earth, if you stay rooted, you too will rise up and bear fruit - insignificant, perhaps, but still beautiful and noticed by the only One who matters.” If not yet, then soon.

Our meal finished, we stand to leave. I let the screen door fall slap-slap-slap behind me, deliberately, because it reminds me of the door on my childhood home which I hear echoing through the years, a little root snaking back into the good soil of those years. I reach out and take her hand, my heart really, and I feel a little more courage that one day all disappointment will end.

Let the door slap behind you. Be of good courage. Take heart. Christ is King.