Mountain, Be Thrown Down 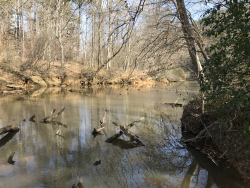 I don't think anyone knows the difference between a mountain and a hill. According to the U.S. Geological Survey, "The British Ordnance Survey once defined a mountain as having 1,000 feet of elevation and less was a hill, but the distinction was abandoned sometime in the 1920's." It goes on to say that "The U.S. Board on Geographic Names once stated that the difference between a hill and a mountain in the U.S. was 1,000 feet of local relief, but even this was abandoned in the early 1970's." So, no one knows. But perhaps it is fair to say that a mountain is bigger than a hill, generally.

Last weekend my wife and I circumvented Oconeechee Mountain in Orange County. While the summit is the highest point in Orange County, the total rise in elevation from its low at the Eno River is only 350 feet, the summit topping out at a mere 867 feet. Consider this: the tallest building in Raleigh is the PNC Plaza building at 538 feet, so from Eno River to Summit, you've only climbed two-thirds way up the stairs of the PNC Building - which, by the way, is less scenic, from what I have seen. Still, it is enough. From the summit they say you can see the gray and balding heads or dreadlocks of every liberal in Orange County, which is no greater hyperbole than saying Oconeechee is a mountain. I can't verify that. If you don't like that joke, try this one: From the summit look north and you can see the trucks and guns and dogs of every conservative in Caswell County. I can't verify that either.

In my notebook from that day I wrote " burl - mountain laurel? - variegated green ground leaf - rock wall - white, sandy top soil," as reminders to summon up memories days later. Waking one night, in the quiet hours, the words helped me return. I lay in bed retracing my steps through the forest. I put my hand on the tree trunk's burl, a deformation, like a tumor, yet one that wood sculptors prize. Burls are the result of some stress - disease or fungus or injury - and yet become a beautiful metaphor for God's putting to good some suffering or other hardship we may endure. There's more. Many burls are hidden, attached to roots, and so like many hardships their possibility is uncovered later, after death, when all is exposed to light and the craftsmanship of God is known. Heady thoughts for wee hours.

Even in the night I hear the annoying hum of the traffic on Interstate 85, which runs surprisingly close to the south side of the mountain. But it's my dream, and I will it away and imagine the forest spreading south, with nothing but bear and bird between me and the nearest community. Where we turn to circumnavigate the mountain, heading north, I stoop to touch the forest floor, topped by a thin sprinkling of white sand. At first I think it must be that spread by trail maintenance crews, but it is smattered across the sloping, leaf-strewn ground, a mystery, yet perhaps a part of the more xeric (dry) soils of the south-facing slopes.

Reaching the north side, the flora changes. Mountain laurel, rhododendron, and evergreens thrive. The highway sounds subside. The river song invites. A cool breeze wafts through the trees, and if you sit on one of the boulder outcrops there you might think yourself in a cove in the Blue Ridge. The understory is covered in places with ferns, and a rock wall exposed by a quarry abandoned decades ago looms above us. She looks for a rock to throw in the river water, an impulse, a depth-sounding. She settles for a stick which, lightly touching the water, floats away, east, toward the Atlantic.

And then, I went back to sleep, my reverie ending before the long slog uphill - that is, up-mountain - back to our car.

I went to find a mountain as I thought it might help me visualize a passage of scripture that is astounding. Consider it alone, even in context, and it's a stiff drink of liquor, undiluted by tonic or water or juice. The Gospel passage recounts how returning from the country to Jerusalem one morning, the disciples are astonished to see a fig tree from the day before that Jesus had cursed, now withered. Here's the bracing draught given by Jesus: "Have faith in God. Truly, I say to you, whoever says to this mountain, 'Be taken up and thrown into the sea,' and does not doubt in his heart, but believes that what he says will come to pass, it will be done for him. Therefore I tell you, whatever you ask in prayer, believe that you have received it, and it will be yours" (Mk. 11: 22-24).

Now wait. Before you qualify these words of Jesus, before you empty them of meaning by explaining them away and saying what Jesus could not have meant, let the power of the words wash over you. Decline commentary. Consider how they might have been heard by first-century disciples who had nothing but Law and Prophet for context and yet who had just seen Jesus command nature with His word to the fig tree. The message: God is powerful enough to move mountains of doubt, unbelief, suffering, sickness, unemployment, mental illness, and even death. The world bows to His word. Reading it, I can only pray, "Lord, I believe you can move mountains; yet help my flatlander's unbelief. Grow my faith."

Once, after that day, I was praying about a mountain in my life. Instinctively, reflexively, I reached out and pushed it away with my hands. I said "Be taken up and thrown into the sea." I'm waiting to hear the splash, to watch it slide away down the Eno to the sea, thrown down at His word.

Sometimes writing is like trying to push an oversized pencil across the page. My fingers won’t cooperate. The instrument is too blunt. The letters are misshapen and, if I am not careful, smudged. A mess. Like in third grade when I was tasked with helping a classmate who had fallen behind in his writing. I sidled up to him as he bent over the lined page, his pencil thick and unwieldy in his hand. Great tears welled up and dropped on the letters which wobbled on the lines, pooling there, and with a careless movement of his palm, smeared a leaden stew across the instrument of his torture. We began again.

But I’m not sad, just cloudy. I woke today lethargic, sluggish. I told a friend at church that I blamed the excess of chocolate consumed the prior evening, the nearest to a hangover I’d ever had. During communion I took grape juice, not wine, for the least profound of reasons: the juice was closer and took less effort to reach. Home, I stared at the computer screen for ten minutes before I realized what I was doing --- that is, nothing. I rested my head in my hands for a time, for it felt too heavy to hold up. Mustering all my residual energy, I put on a coat and scooped bird seed into a bucket from the tin in the garage and walked to the feeders in the backyard and dropped it in. Looking up, exhausted, I saw the birds watching me from the uppermost branches, twittering in green boughs against blue sky, waiting. Returning, I lay crossways over the bed, prone, my arms dangling over the side like a lion in the midday heat flung over a branch.

“I am the vine; you are the branches,” says Jesus. “If you remain in me and I in you, you will bear much fruit; apart from me you can do nothing” (Jn. 15:5). A few days ago I posted this verse on a yellow sticky note on the edge of my computer screen, letting it hang there, the meaning elusive. Maybe lethargy, a wasted day, a day when you can’t get your life in motion, is a day that you can be reminded that it is God who works in us to bear fruit, not us.

In his classic work, Abide in Christ, Andrew Murray says that the “connection between the vine and the branch is a living one. No external, temporary union will suffice; no work of man can effect it: the branch, whether an original or an engrafted one, is such only by the Creator's own work, in virtue of which the life, the sap, the fatness, and the fruitfulness of the vine communicate themselves to the branch. And just so it is with the believer, too. His union with his Lord is no work of human wisdom or human will, but an act of God, by which the closest and most complete life-union is effected between the Son of God and the believer.” The point of these long and fat sentences: the fruit of life in Christ is God-produced, not human-engineered. A day of barrenness is to be expected, the winter in a day, the spring to follow.

My copy of Abide in Christ is a dog-eared one, inherited from my late mother, a paperback with a faded rendering of a clump of grapes on its cover. An insomniac, I imagine my mother awake in the wee hours reading, thankful, perhaps, for the quiet hours within which to rest in words, her mind perhaps stirred awake by the hope of reading. Her days had little time for reading, with four children, a house to clean, and three meals to prepare every day. So, the night, I suspect, became a refuge.

Abide. To wait for, one dictionary definition says. To sit alone in the quiet. To get busy, at nothing. To lay down in the deep rest of the Father and let Him do the deep and hidden work of change. Murray says that we can “abandon all anxiety about your growth and progress to the God who has undertaken to establish you in the Vine, and feel what a joy it is to know that God alone has charge.”

All of which means I can go back to bed, lay my pencil down, crumple the paper and throw it in the waste bin, and rest. Rest in Christ. Abide in Him. And that’s not nothing.